The Swan Inn was founded in the middle ages by the monks of Thame who were locally renowned for their brewing exploits.

Tetsworth marked on the earliest known map of England.

Hermitage founded at Tetsworth to maintain and repair road.

Innkeeper of The Swan was indicted for selling victuals at excessive prices.

John Bonyer was tenant of The Swan.

It is rumoured that Queen Elizabeth I stayed at The Swan. During the late 16th Century the Petty family were owners.

It was recorded that four armed men attacked a coach and opened strong boxes on the road at Tetsworth. The original parts of the existing building were built: a two storey 'L' shaped timber frame structure with three chimneys. During the 17th century the area around Tetsworth was well noted for the abundance of highwaymen and footpads and this was considered a particularly dangerous stretch of road between London and Oxford.

During the Civil War, Major Gunter's cavalry was stationed at Tetsworth prior to the Battle of Chalgrove.

King Charles I and Queen Henrietta Maria stationed themselves at Tetsworth from where they were able to set up headquarters in Oxford. The French Ambassador stayed at The Swan when his coach broke an axle on his way to Oxford.

Sir Charles Sedley owned The Swan and changed its name to 'The Sedley Arms'. He was a courtier of Charles II, playwright and noted for his debauchery which was chronicled by Pepys. The Swan was extensively remodelled adding the ballroom and providing a brick facade.

The road became a turnpike.

Queen Victoria visited Oxford on 'Progression' with her Mother and visited The Swan on her return journey.

Due to the establishment of the railways and consequent decline of road traffic, part of The Swan was converted into a post office. 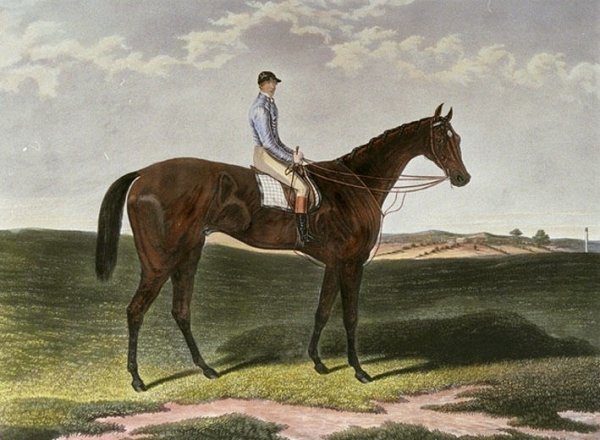 Sir Bevy’s stabled at The Swan at Tetsworth wins the 1879 Epsom Derby.

Ridden by twelve times champion jockey George Fordham who hadn't been seen in public throughout 1875-1878 due to failing health. Fordham came out of retirement for the 1879 flat season to ride his only Derby winner though he had twenty-two attempts during his career

Blimey he was small. When Fordham Won his first Cambridgeshire his weight was an unbelievable by today's standards ,3 stone 12lbs

THE OWNER'S identity of Mr Acton is not entirely clear. It was known that a member of the Rothschild’s family, Leopold de Rothschild who had won several major wagers on the race used the name Mr Acton for his racing concerns, but subsequent events make the ownership less clear after the death of his father Lionel de Rothschild on 3 June 1879, All of Sir Bevy’s race entries were made void. So which member of the family really owned the horse is still a bit of mystery.

SIR BEVYS made his three-year-old debut in the 100th Epsom derby, 28th May 1879. In early betting he had been listed at 50/1 and was back down to 25/1 but his price drifted out again, because some of his doubters felt he lacked the dash of a classic winner. Run in a bog It was the second slowest time on record to date.

Being backed again on course he started at odds of 20/1 against his twenty-two rivals.

with the adverse weather conditions everybody knew it was going to be a slog, although it was a sunny day the previous week’s heavy rain left the ground very soft even muddy.

Sir Bevy’s missed the break and was left several lengths but made up the lost ground steadily and was just behind the leaders coming around Tattenham corner. In the final two furlongs Visconti Took the lead and looked the likely winner, but he tired in the ground and Sir Bevy’s stayed on dourly into the lead just inside the final Furlong and then held off the challenge of the 100/1 shot Palmbearer to win by three quarters of a length.

The history books say that it was a bad Derby, mainly because Sir Bevy’s only won one more race during that season and was then retired. Or could it be that it took so much effort to win the Derby it broke the horses spirit?

The Swan closed. Furniture and fixtures were stripped out and windows boarded up.

On January 2nd The Swan at Tetsworth was launched as a quality Antiques Centre, Restaurant and Bar.

The Swan was purchased by Tom Keane and James Wang. They introduced what is now a thriving auction room Running alongside the antique centre, their intervention saved the Swan from certain closure.